Hugh Thomas Crossley, partner in the well-known Methodist revival team of Crossley and Hunter, was born on an isolated homestead in King Township in present-day Ontario. When he was seventeen, a visit to a Methodist camp meeting changed his life. After several days of attending the revival, Crossley dedicated his life to Christ.

He spent several years teaching, then moved to Cobourg, Ontario, to attend Victoria College. There, he met John Hunter, who would become Crossley’s lifelong friend and evangelistic partner. Hunter’s passion for saving souls was infectious, and soon the two were preaching together in Cobourg. Their partnership was interrupted upon graduation, as Crossley, who was ordained in 1880, began a pastoral ministry.

Although Crossley enjoyed his work, he longed to conduct revivals more frequently than a single church could support. One evening in 1883, he penned a letter to Hunter. It had been nine years since they had conducted revivals as a team. Crossley felt that it was time for them to reunite and to enter full-time evangelistic work. Unaware of Crossley’s intentions, Hunter wrote a similar note the same evening. The letters crossed in the mail, and the friends took the remarkable coincidence to be a sign of God’s calling to conduct revivals together. They met one evening at Hunter’s home in Essex Centre and began their work there that night. 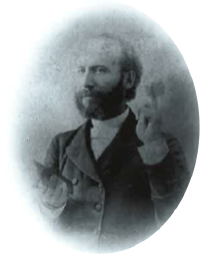 The partnership bore fruit immediately. During their first year together, over 2,500 people professed conversion. In a short period of time, their contemporaries came to view Crossley and Hunter as the greatest evangelistic team of its day. Requests for their services poured in, and soon engagements for their revivals were booked three years in advance.

Crossley and Hunter conducted meetings throughout the United States and Canada, focusing most of their attention on smaller communities. They were the talk of the town in these centres, where town councils would frequently proclaim a holiday to allow those in the vicinity to attend church en masse. The meetings were almost always interdenominational, and the ministers of each participating church played a role in the services. All were united in a community drive for evangelism.

Within this whirlwind of activity, Crossley was the essence of calm. He almost always wore a smile, causing one observer to remark that Crossley’s face “oft-times is radiant with an almost supernatural light.” His musical talents especially elicited favourable comments. Known as the singing evangelist, he frequently delivered his thoughts in the form of a song sermon, underlining the important themes of his message with relevant hymns intoned in his mellow baritone voice. Many of the crowd favourites were his compositions.

Whatever the format of his presentation, the message was always the same. Drawing on passages of the Bible, Crossley would seek to convince his listeners of the need of repentance for sin, the possibility of redemption in Christ, and the opportunity for regeneration with the help of the Holy Spirit. His sermons inevitably concluded with an earnest appeal to “accept Christ at once .”

But Crossley’s influence did not end there. He was convinced that Christianity should be applied to all aspects of a believer’s life. In sermon and song he encouraged his listeners to consider God’s place in all things. As far as Crossley was concerned, a conversion to Christianity involved a conversion to a whole new way of living. Furthermore, individual reform was to express itself in a changed society. And Crossley worked with Canadians in all Protestant denominations to try to create a country devoted to the principles of evangelical Christianity.

As a result of Crossley and Hunter’s efforts, the character of many towns changed visibly during a revival. Drinking establishments were frequently emptied, and on several occasions theatres closed for lack of business. Local newspapers often noted the widespread changes. A report regarding a series of services in Calgary was typical: “Many non-church-goers have been brought in; a prize fighter, and at least one saloon-keeper being among the number.” Crossley and Hunter’s legacy remained long after they left town. In the homes of many of their converts, the evangelists’ portraits graced parlour walls, and Crossley’s hymnbook, Songs of Salvation, sat ready on the parlour organ to be opened to a revival favourite. His book, Practical Talks on Important Themes (1895), which guided converts as they applied their faith to all aspects of life, might be found resting beside a chair.

In this book, Crossley attempts to articulate a faith that is intellectually sound. “God does not stifle reason and enquiry about religion,” he counsels, “but says, ‘come now, and let us reason together.’” At the same time, Crossley reminds his readers, some realities lie beyond human understanding. “Faith,” Crossley notes, “is not contrary to reason. The mystery of the telephone I cannot reason out, but I believe in the telephone and telegraph.”

The influence of Crossley and Hunter was evident in the lives of several Canadian leaders. In addition to their impact on Canada’s first prime minister Sir John A. Macdonald (see the John Hunter), their preaching brought conversion to the lives of Sir William Hearst, the premier of Ontario, and the Reverend William Bonniwell, who later became an associate of evangelist Billy Sunday.

After Hunter’s retirement in 1910, Crossley continued to evangelize before retiring in 1926. In his final years, he received a doctor of divinity degree from Wesley College–the first Canadian evangelist to be so honoured. A lifelong bachelor, he spent his last years in the home of the Reverend Ernest Crossley Hunter, the son of John Hunter.

Hailed as “the last of the great Canadian evangelists” of his era, Hugh Crossley died in 1934. Together with Hunter, he had conducted approximately four hundred revivals in twenty-six years. According to one obituary, “Over 200,000 publicly accepted Christ following their numerous campaigns.” In the words of a Toronto Daily Mail and Empire writer. “their fame was as great as that of [Americans] Sankey and Moody, or Torrey and Alexander and some old-timers declare even greater.” Summarizing a lengthy evangelistic career, the writer concluded that “the late Mr. Crossley brought more converts to the penitent form than any other single individual of his generation.”