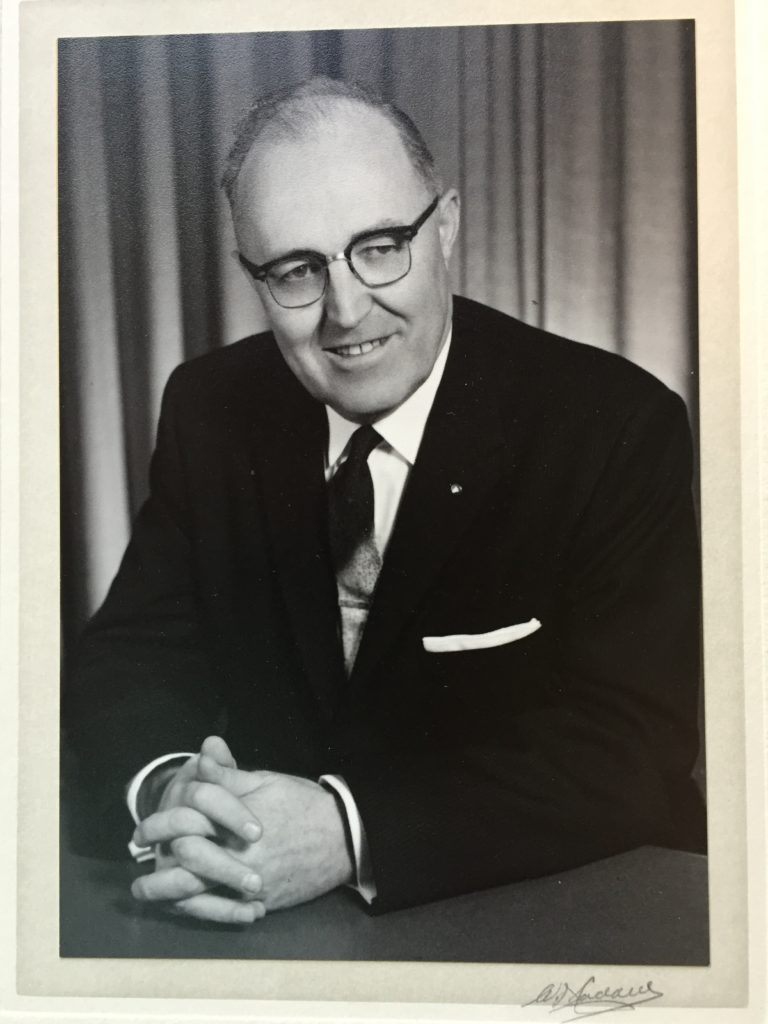 Leadership that Promoted Others

Most Canadians living in the mid-20th century will have heard of the Ernest C. Manning and William Aberhart, but far fewer will have heard of Orvis A. Kennedy, Manning’s lifelong friend and closest political advisor. In fact, Kennedy was arguably as influential as the other two in the political world, but chose to operate most of the time behind the scenes. For a generation in the Social Credit movement he promoted others to positions of leadership and service, and it was in his role as a political organizer that he made his greatest political contribution.

Orvis seemed born for leadership, for in every sphere—business, politics, church, and Christian organizations—he rose quickly to the top. Full of energy and determination, possessing a servant’s heart, and an influencer from his early years, he became a recognized name in Alberta and beyond. He left a legacy of integrity, respect, and accomplishment in every area of service

Born on August 5, 1907, in Dryden, Ontario, Kennedy moved with his parents to Lanfine, Alberta, in 1918, and then to Edmonton in 1925. There he would spend the rest of his life and live out his political career.

Raised in a church family, Orvis was exposed early in life to the Christian gospel, and made an early start on his Christian journey, gaining experience from Tuxis and Trail Rangers camps after World War I.

His mother was a serious Bible student and involved herself in women’s community work. His father was the first mayor of Dryden. No doubt these two strands planted seeds of both religious and political interest in young Orvis’ life, two arenas in which he made his lifelong contributions.

Of particular interest is that, as a young boy, Orvis built a small radio set, through which he took an interest in the Sunday broadcasts from Calgary by a certain William Aberhart.

In 1934, Orvis married Gladys L. Miller of Edmonton. The couple had three sons—Ernest, Edward, and Laurence. Later in life (February 29, 1972) Orvis lost his beloved wife to cancer, and two years later married Mary Porcheron, a family friend and widow of Dr. Remond Porcheron. The two enjoyed a fulfilling life together until her death in 1995.

Orvis came to Edmonton having lived for seven years on the family farm in Lanfine, eastern Alberta. From 1927 to 37 he worked as chief clerk and assistant manager of the hardware department at Edmonton Hardware. In 1937 he became a full partner, president, and sales manager of National Hardware.

It was the Great Depression, and Orvis remarks how he was so fortunate to have a job during that time that paid him $15 a week. It was also during this time that he began to think about the distribution of wealth among the populace.

He wrote in his own biographical notes, “It was here my strongest impressions were formed regarding an economic system which could not distribute the abundance which God had provided for His own needy creatures.” This predisposed him to the doctrines of Social Credit, to which he would commit himself fully for years to come. 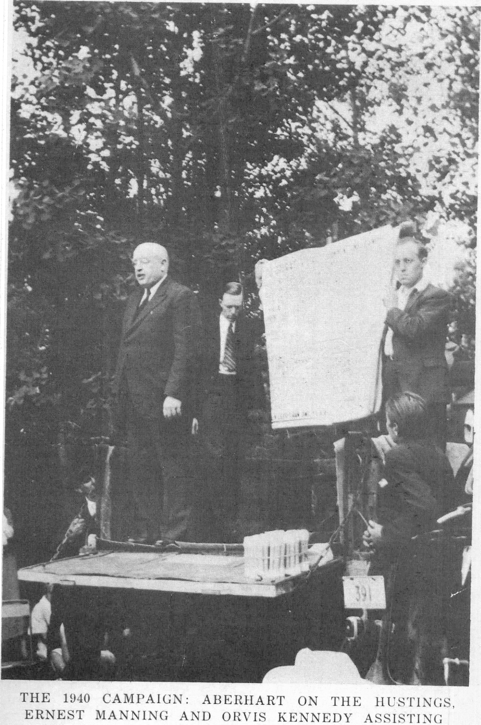 Though heavily involved in Christian ministries all his life, it was in politics that he had his greatest influence, and it was there that his Christian convictions and ethics informed his every decision, making him so successful and a powerful influence to those around him. His Christian faith and public life remained inseparable.

In the early 1930s Orvis first heard William Aberhart speak about Social Credit. He became one of the first supporters, and in 1934 one of the founders, along with Aberhart and Ernest Manning, of the Social Credit movement. He and Manning would become close personal friends and political colleagues for the rest of their lives.

In 1934 Kennedy was elected to the board of the Alberta Social Credit League, serving as a director until 1940, when he became first vice-president. In 1945 he became the national organizer for the Social Credit Party and in 1954 he became president.

During these years Kennedy served a brief stint as a Member of Parliament. Having lost his 1934 election bid in Edmonton East, he won a by-election there in 1938, serving in Ottawa until the 1940 general election. In 1939 he was presented to Their Majesties King George VI and Queen Elizabeth during their tour of Canada.

Kennedy’s influence reached beyond the borders of Alberta. As campaign organizer, he played a key role in the election of the first Social Credit government in British Columbia in 1952, when W. A. C. Bennett became its premier.

I recall as a teenager, the day after the 1959 election, in which the government captured all but four of the seats in the legislature. My father, who usually took a few days off after an election campaign to work around the farm, invited Orvis to join him.

He said to Orvis, “We need to examine what kind of timbers the great electoral tides have washed up on the beach.” And with that, they both went to work repairing the roof of a barn, all the while discussing the formation of the next Alberta Cabinet. 1

Preston Manning credits Kennedy for keeping Alberta out of trouble during the early days of the oil boom.

Oil patch developers—not all of them but some of them—familiar with the political corruption that infected state governments in Texas, Oklahoma, and Louisiana, would arrive in Edmonton with two questions: “Where is Leduc?” and “Who do you pay?”

And it was the personal integrity of Orvis Kennedy, and the people who worked with him—their unwillingness to be bribed or to misuse their political influence for private gain—that protected Alberta from the scandals and theft of public resources that plagued the early days of the oil industry in so many other jurisdictions. 2

He then comments: “Those who knew him, of course, recognized that the personal integrity of Orvis Kennedy was rooted in his personal commitment to Jesus Christ—in the application of his Christian faith to his daily life and work.” 3

Orvis and his family served in the United Church in his earlier years, but when Fundamental Baptist Church was founded in Edmonton in 1941, he became a charter member and board member, serving continuously, for seven of those years as board chair.

After the 1935 election, and both Aberhart and Manning had moved to Edmonton, Kennedy urged them to start a radio ministry in Edmonton, resulting in the founding of the Edmonton Prophetic Conference. Also in 1935, when Manning founded the Christian Laymen’s Forum, Orvis became associate director. In 1948 when Manning took over full directorship of the radio program—Canada’s National Bible Hour—Kennedy became business manager and assisted in expanding the program across Canada. He also became a regular speaker on the broadcast.

When Orvis’ son Ed was three, he became very sick with scarlet fever. One night his Dad was lying beside him on the bed. The doctor said that, if the fever didn’t break, Ed would not survive the night.

Orvis reached for his Bible and began reading. That night the fever did break, and Ed survived. Because the Bible played such a pivotal role at that point, Orvis wanted to become a Gideon and do his part in spreading God’s word. That he did, joining The Gideons in 1944.

He held most offices at the local level, and by 1949 had begun his 23-year span of service on the Canadian National Cabinet (board of directors), where in 1968 he became the national president, serving for three years. He and his wife Gladys—and after her death his wife Mary—served wholeheartedly together in The Gideons.

He had also become a charter member of the Christian Businessmen’s Committee in 1943.

In these and other local Christian endeavours Orvis Kennedy found himself in leadership.

Orvis Kennedy seemed called to leadership. Not content simply to become part of a movement or organization, he rose swiftly to top leadership positions, and in those positions helped to shape the movements and organizations themselves. Throughout his life he gives the picture of a man with a mission, one he pursued with passion until his dying day.

Though a front-line leader and organizer, in politics he often led from behind the scenes. Preston Manning characterizes Orvis as a man who promoted other people and built them up. In his eulogy at Orvis’ funeral on April 7, 1997, Manning said:

Orvis was a modest man. He never sought recognition or headlines for himself, while contributing to the political success and public stature of a whole generation of Alberta’s MLAs, Cabinet ministers, and members of Parliament.

He was a true believer in the power and potential of ordinary people, all of whom were extraordinary in his eyes. It was this faith in the power of the people that made him such an exceptional grassroots political organizer.

But the people of Alberta have never really been told how much they owe to Orvis Kennedy for what his personal integrity accomplished and protected for his province. 4

He received the commemorative medal on the 125th anniversary of confederation.

Orvis Kennedy’s legacy lies in his ethical and honest dealings in politics and government, and in helping keep Alberta from the political scandals that might otherwise have embroiled it during the heady days of economic development, especially in the oil patch.

It also lies in the value he brought to every movement and cause—especially the Christian ministries—he helped lead, developing and shaping them for greater effectiveness.

During the last year of Dad’s life, and with declining health and severe Alzheimer’s disease, I received a phone call from Bud Olson, the Lieutenant Governor of Alberta at that time, inviting Dad to afternoon tea at the Legislature…Bud Olson just wanted to have a visit and say “thank you” to Dad for encouraging him to be involved in political life in his early years, and later to become a Member of Parliament for many years.

It was very humbling and touching to sit in the office where heads of state are invited. Because of Dad’s Alzheimer’s disease, his short-term memory had really suffered; so on the way home in the car I asked Dad whom he had just visited. He said very clearly, “The lieutenant Governor, who is the Queen’s representative in Alberta.”

I said to him, “Dad, one of these days not just the Queen’s representative, but the King of Kings will be calling you to His home. He will not only say “thank you” but “Well done, thou faithful servant.” To which Dad replied, “Yes, he will call me soon, and I hope there is still work for me to do in heaven, because I know there is still much to be done.” 7

Manning, Preston. “Alberta Ethics: Past and Present.” Draft of an article dated August 8, 2014.

———. “God in the Marketplace,” Remarks by Preston Manning to a Celebration of the 50th Anniversary of Christian Business Ministries Canada (CBMC). Mississauga, Ontario: October 21, 2008.

———. “Three Challenges for the Conservative Movement,” Notes of Remarks by Preston Manning to the annual Manning Networking Conference. Ottawa: March 10, 2012.

NEIL BRAMBLE is a freelance writer, editor, and speaker living in Surrey, British Columbia. A teacher by profession, for 16 years he taught English, history, and political science. Later he joined the staff of The Gideons International In Canada and, for 17 of his years on staff, he served as editor of The Canadian Gideon. A leader in various contexts all his life, he has read widely in the area of leadership and attended many leadership-training sessions. He knew Orvis Kennedy personally.