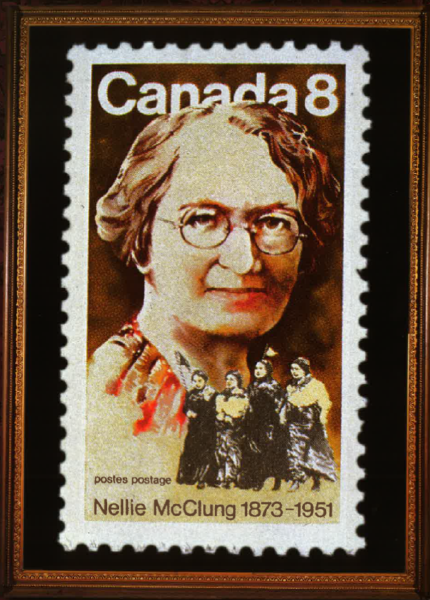 Nellie McClung had a vision for Canada and for western Canada in particular. Calling it the Land of the Second Chance and the Land of the Fair Deal, McClung believed that the western prairie was a perfect place to build a new civilization based on her understanding of God’s intention for creation. As she firmly claimed in 1915, “To bring this about – the even chance for everyone – is the plain and simple meaning of life.”

McClung was born on a small farm near Owen Sound, Ontario, in October 1873. Her father, John Mooney, emigrated from Ireland in 1832 to work as a logger in Bytown (Ottawa), then began farming the stony soil of the Bruce Peninsula. Eventually, he married Letitia McCurdy, an emigrant from Scotland several decades his junior. Her Methodist father’s jaunty good humour and her Presbyterian mother’s dour dedication to duty marked McClung’s imagination, and the twin qualities of optimism and determination feature in the fiction that she later wrote as essential elements for prairie life. The Looney family moved west to Manitoba in 1880, travelling by steamship, foot, and oxcart to a homestead southwest of Brandon. Nellie, the youngest of six, gloried in the prairies and worked on the farm until she began school at age nine. By fifteen, she was a country schoolteacher. It was at this time that she met Annie McClung, the wife of a Methodist minister and the person who would change her life. Part of Annie’s evangelical passion was a dedication to the causes of temperance and women’s suffrage. Nellie had found her mentor. She had also found, as she remarked, “the only woman I have ever seen whom I should like to have for a mother-in-law.” Nellie married Annie’s son, Wes McClung, in 1898, and bore five children over a long and happy marriage.

Annie McClung was instrumental in starting Nellie’s writing career. Insisting that McClung enter a short story contest, Annie cared for the children and household while Nellie wrote. The story did not win the contest, but it did become the opening chapter of McClung’s first novel, Sowing Seeds in Danny, the Canadian best-seller of 1908 and the best-selling Canadian novel to that date. Annie also initiated McClung’s career as a public speaker, arranging an event for the Woman’s Christian Temperance Union in which Nellie read from her recent novel. As it was for many reformers of the period, male and female, prohibition was an issue of lifelong concern for McClung. 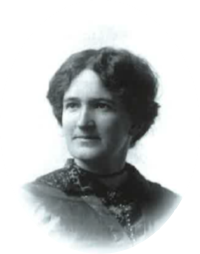 McClung also worked for women’s rights. When she and her husband moved to Winnipeg, she joined the Political Equality League. In these two causes she developed into a witty and persuasive orator whose pragmatic approach to politics was captured in the motto: “Never retract, never explain, never apologize.” Political activism in the service of social transformation and religious commitment were thus entwined for McClung from the beginning. Indeed, her social gospel novel about the suffrage battle in Manitoba, Purple Strings, underscores her understanding that social activism was mandated by God. Denied ordination by virtue of her sex, McClung used her literature as a pulpit to preach her gospel of feminist activism and social transformation. Her homely tales of rural Manitoba life came on the scene at precisely the time that the country was looking for a national literature to define its character. Through her humourous, semi-didactic stories, McClung shaped her audiences’ imaginations about the nation’s future, seeing here, too, a religious duty. Her “Writer’s Creed”, a speech given to the Canadian Authors’ Association, clearly outlines her view of the writer’s responsibility in this regard.

Her fame as a novelist and skill as a public orator made her a potent political force when the battle to grant women the vote escalated. By 1914, McClung was giving speeches around the country in support of suffrage and temperance, to the dismay of her political opponents. Her efforts were cataly1ic; the right person at the right time, she galvanized support for women’s political enfranchisement. It was no surprise that Manitoba women were the first in Canada to receive the vote, on January 28, 1916. Indeed, McClung’s platform skills were such that she received numerous requests from international audiences. She accepted extensive speaking tours in the United States in 1916 and 1917, raising Canada’s national profile in the process.

McClung moved with her family to Alberta in December, 1914. There, she became part of a network of activist women, including Judge Emily Murphy, the first woman magistrate in the British Empire. With Murphy, Henrietta Muir Edwards, Irene Parlby and Louise McKinney, McClung became one of the Famous Five who brought the Persons Case to the British Privy Council in 1929 in which women were declared legally persons in Canada. In addition, McClung ran successfully for the Alberta legislature in 1921 as a Liberal, serving until 1926. In 1921, she was the only female Canadian delegate to the Fifth Ecumenical Methodist Conference, held in London. She was also the first female member of the CBC Board of Governors, in 1936, and in 1938 she was appointed to the Canadian delegation to the League of Nations, where she served briefly on the League’s committee for social legislation.

Throughout this period, McClung continued to be active as a writer, publishing novels and numerous short stories and speeches. She later undertook a weekly newspaper column, but poor health eventually forced her to give it up. McClung also actively lobbied for the ordination of women in the United Church of Canada, believing that “Christ was a true democrat. He made no discrimination between men and women. They were all human beings to Him, with souls to save and lives to live, and He applied to men and women the same rule of conduct.”

Nellie McClung’s life reflects a passion for a cooperative community of equals, a vision grounded in the belief that God wishes our “loving service, freely given.” In My Religion, she lays this out clearly: “It is not, ‘Chant my praises’; ‘Defend my theories’; ‘Kill my enemies.’ No, no – but a greater, better, lovelier task: ‘Feed my lambs.’”

McClung was a best-selling author. a political and social activist, and a forthright Christian whose liberal theology was grounded in a confidence that “no one has a corner on light or grace.” She believed that faith should he professed in action and made her own life an example, struggling to overcome the prejudices of her culture in herself and in others. Nellie McClung – celebrated throughout Canada as Our Nell – died in Victoria, British Columbia, in September 1951.