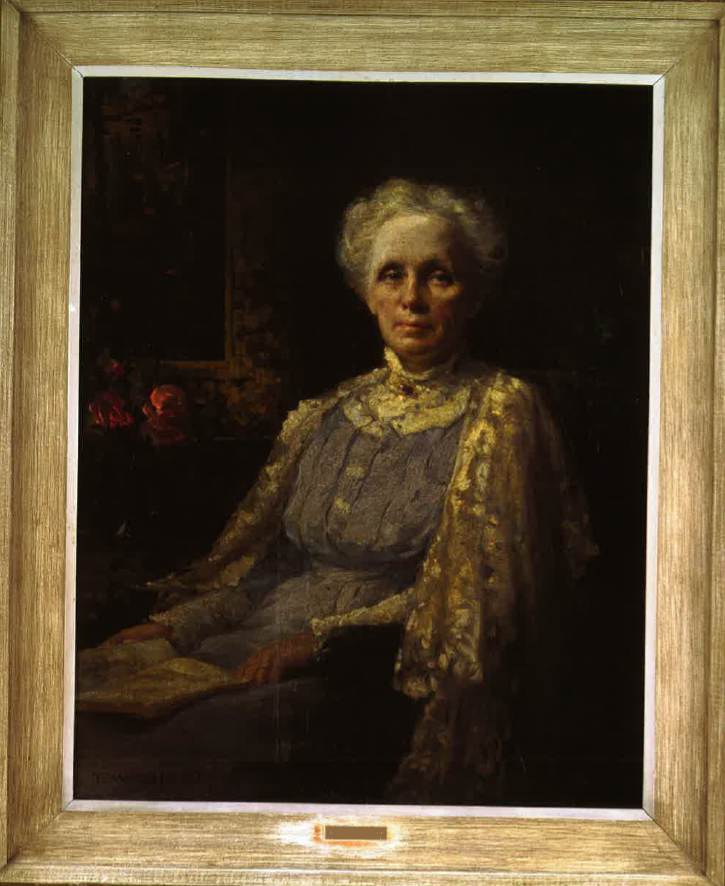 Margaret Proctor Burwash had a keen interest in the welfare of female students at the University of Toronto’s Victoria College, and believed that their education should be largely in the hands of women. To this end, she wrote in 1895, “I believe in men and women standing together in intellectual work, but there is a side of our nature which is exclusively feminine, which cannot be developed or moulded by men. It is a great misfortune for any young woman to be dwarfed … in this ‘quality’.” Although in time she hoped to see women instructors in university work, to achieve the more immediate goal of creating a space for women, she drew on her educational background and her friendship with well-to-do Methodist women to lead the fundraising and furnishing of Annesley Hall, a Victoria College women’s residence completed in 1902. Her efforts were formally acknowledged in 1912 when grateful supporters presented her with a portrait by McGillivray-Knowles to be hung permanently in the residence. In a warm tribute, reference was made not only to her generous and loving character but also, discretely, to its source, a “heroic fortitude when the crushing storms of life fell heavily on her.”

“A faith formed, tested, and strengthened by family tragedy.“

Like many women of her time, this reserved and dignified woman had experienced the loss of a child; in her case, not once, but eight times. Of the twelve children born to Margaret and her husband, Nathanael Burwash (the chancellor of Victoria College), only four sons reached adulthood. And once, in less than a week in June, 1889, the couple was confronted with the deaths-from black diphtheria – of four children, including their youngest: twin sons, aged four. The losses marked her for life, causing her to transfer some of her interest, in the words of her eldest son, to a “higher and more spiritual vision of the life beyond.” These tragedies also stimulated her to work with her professor husband in advancing student concerns at Victoria College once her domestic life became less demanding.

From childhood, Margaret had seen, as had her husband, that Methodism and education were natural partners. Margaret was born on a farm in Lambton County, near Sarnia, Canada West (Ontario), in 1842, to Edward Moore Proctor and Janet Burns, both recent English immigrants. She grew up surrounded by a large extended family. Her grandfather, Samuel Proctor, who lived nearby, had converted to Methodism as a young man in Lincolnshire. By refusing to pay the church tithe, he had more than once seen the seizure of items of furniture as a bailiff tried to enforce payment. Although Margaret’s father was not known to be particularly religious, he shared his father’s political convictions and agitated on behalf of free public schooling in Ontario. His daughter was among the first to reap the benefits of the new common school system in 1850.

At age five, Margaret began attending a nearby school privately conducted by a Scottish Baptist lay preacher. Relying heavily on the New Testament for reading material at the primary level, he also ensured that by the time she was eight she had read Pilgrim’s Progress. In 1851. her family sold their farm and moved to Sarnia, where she received a grammar school education and secured a first-class teacher’s certificate. After several years as a teacher in surrounding country schools, she enrolled in 1863 in the Wesleyan Female College in Hamilton, Methodism’s recently opened institution of higher education for women. 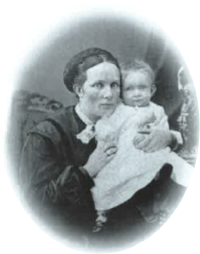 When two years later she graduated with the diploma Mistress of Liberal Arts, she had reached the highest educational achievement open at the time to women and, in her own words, “the fulfillment of my most earnest hopes.” These hopes soon took a turn to domesticity, however. Among the Methodist dignitaries who attended the graduation ceremony; where she gave the valedictory address, was Nathanael Burwash, who soon began to court her. Asked to join the Wesleyan staff because of her previous teaching experience and high academic standing, she remained at the college until August 1867, when she was offered the position of preceptress of the Mount Allison Ladies’ Academy in Sackville, New Brunswick. By then engaged to Burwash, she resigned her new post at the end of the first session, and on Christmas day 1867 the two were married at her parents’ home. Shortly thereafter, on a professor’s modest annual salary of $1,000 (with $150 in arrears, and another $400 committed to the college endowment fund-raising drive), the two established a home on the ground floor of Victoria College’s academic building.

By all accounts and as evident in their correspondence, the marriage became a strong partnership where each was able to drop the reserve assumed in public life and share fully, feelings and concerns on a wide range of issues. From the beginning, they established the habit of Scripture reading and prayer in the morning and evening. Although Margaret’s religious expression was more practical and less theologically informed than that of her husband, their faith formed a common bond, tested and strengthened by family tragedy. In addition, both were raised on farms; were successful teachers, and shared a love of music, literature, and nature, the latter enjoyed especially in later years at their summer cottage at Go Home Bay in the Muskokas, a resort area for a number of University of Toronto faculty. There, they often entertained members of nearby Indian tribes and hosted visiting students from Japan. Such contact arose from their interest in home and foreign missions, and in 1913, at the request of Victoria graduates serving in Japan, the Burwashes made an extended visit to Methodist and other educational centres in that country.

Although grueling for a couple in their seventies, the visit served to cast in a more positive light the end of Nathanael’s long tenure as the chancellor of Victoria College. It was at Margaret’s instigation, but with her husband’s support, that complaints were lodged in 1912 against perceived curfew infractions by women students at Annesley Hall. The dispute culminated in her husband’s resignation shortly before the trip to Japan. By the time of Margaret’s death in 1923, all grievances were reconciled, thanks to the leadership of Margaret Addison, the dean of women.

Often lonely after the death of her husband in 1918 and at times uncertain about the whereabouts of her four adult sons, two of whom served overseas during the First World War, Margaret did not cling to this life in old age. Her last recorded words were of longing “to pass over to my father ‘s house.” 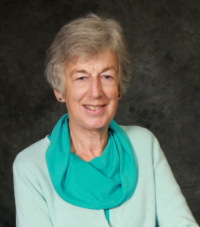 Dr. Marguerite Van Die is a member of the Department of History and of Queen’s Theological College, Queen’s University. She is the author of An Evangelical Mind: Nathanael Burwash and the Methodist Tradition in Canada, 1839-1918 (1989), and has contributed articles to historical journals, collected essays, dictionaries, and encyclopedias. She is the codirector of the Queen’s University project Religion and Politics in Canada and the USA, funded by Pew Charitable Trusts.