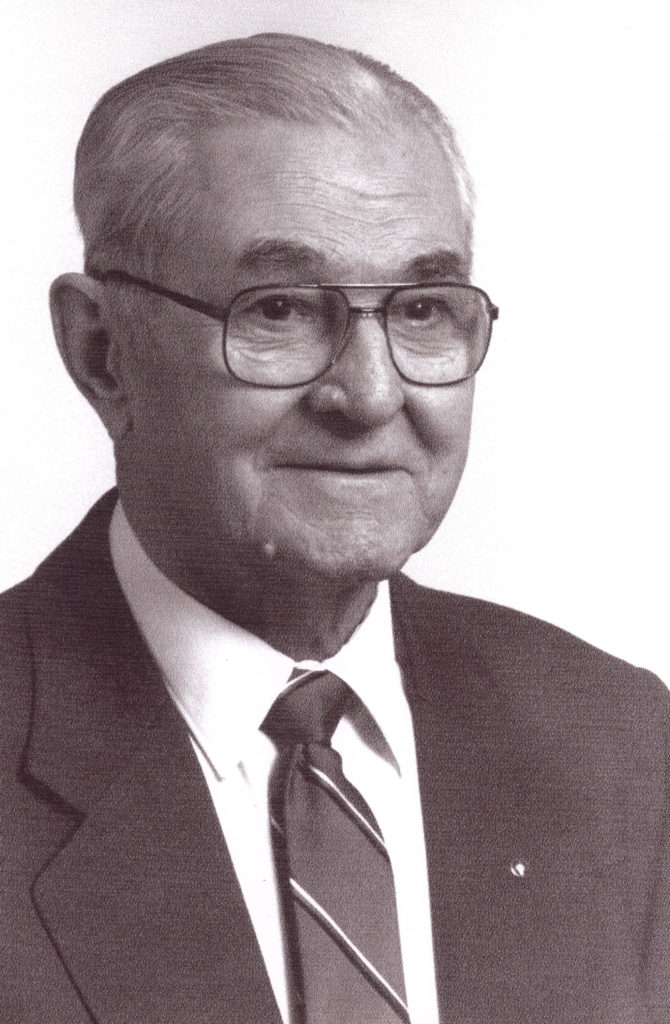 When Leonard Crimp retired in June of 1964, he did so as the vice-president of sales for the H. J. Heinz Company of Canada. An industrious young man of good character and natural ability, he rose to frontline leadership in a large company during its period of major expansion across Canada. He also became one of those Christian statesmen not often seen today, larger than life, someone who could command a following on the strength of his character, his evident wisdom, and his example. Through the H. J. Heinz Company his influence was felt across Canada and in several other countries; in The Gideons it was felt around the world.

Born on January 9, 1899, in Plymouth, England, into a Plymouth Brethren family, Leonard Crimp gave his life to Christ after a gospel presentation by his Sunday school teacher. He moved with his family to Canada in 1911, going directly to Calgary, where the family would establish itself. Shortly after arriving, at age 12, he got his first job as a delivery boy for a jewellery store, making $5 a week—good money in those days.

During his school years, on weekends and holidays, he worked for a grocery store, and soon after graduating—at age 15—he worked for Burroughs and Company, law book publishers, as office boy, handyman, and collector of overdue bills.

This led to a sales job with J. D. McAra, a bookbinding company in Calgary, selling printing and bookbinding in the city.

At the outbreak of WWI, he recalls, “…we thought we were patriotic by helping our country win the war by growing food.”1 This led him into farming and ranching until 1924, during which he also spent some time working in a coal mine to help pay bills. Despite the good harvests of 1923 and 1924, he left farming and moved to Vancouver, where his mother and brothers were then living. There he bought a grocery store and operated it for a year, selling it in 1925.

It was at this time the H. J. Heinz salesman who called on him suggested he apply to the company for a job. This he did, and on July 6, 1925, Leonard D. Crimp went to work for the H. J. Heinz Company in sales. It was his defining moment, for he would remain with the company in sales for the rest of his working career, retiring 39 years later, in June 1964. He started as a route salesman in Vancouver, walking to clients, taking their orders, collecting on his visit a month later.

That year also saw him marry Julia Baker, to whom he had become engaged at Christmas of 1923. He had got to know her after having made friends with her brother Roy, and because theirs was a Pentecostal family, he moved into the Pentecostal fold, where he remained the rest of his life.

In July 1926 Leonard and Julia relocated to Toronto, where Leonard soon became head salesman. In addition to supervising the sales force, he also got sent to other cities as a troubleshooter or emergency salesman.

Leonard and Julia’s first child, Ruth, was born in Toronto in 1927.

In October 1928 Leonard and his family moved once again, this time to Winnipeg, where he was assistant manager in charge, even though he functioned as the branch manager. The branch covered a huge territory, from Armstrong, Ontario, to Fernie, British Columbia.

During the family’s time there, the Great Depression struck, but because the employees’ salaries were maintained, they weathered the storm reasonably well. And in 1931, while in Winnipeg, their second daughter, Shirley, was born.

In July 1932, the company moved Leonard and his family once again, this time to Montreal as branch manager of the largest branch in Canada. There he oversaw three head salesmen and a sales force of 30. The territory extended from eastern Ontario, through Quebec, to the Maritimes and Newfoundland. He sold so many (rail) carload orders of Heinz products to large retailers that he earned the nickname, “Carload Crimp.”

During his 20 years in Montreal, Heinz experienced rapid expansion. The first phase separated the Maritimes into a separate branch, and split Montreal into two. A second phase occurred a few years later, when the company established an eastern region, which included Atlantic Canada, and Leonard became regional manager.

Leonard’s final move came on January 1, 1952, when he went to Head Office in Leamington, Ontario, and there he spent the rest of his career with Heinz, first as general manager of sales and advertising. Then as further growth caused the splitting of these two departments, he became vice-president of sales for Canada and a member of the board of directors. He held this position until his retirement in June of 1964.

The year before he retired, Leonard experienced a tragedy that would leave an indelible mark on his life. It was November of 1963, and Leonard had just wound up a successful business trip to Atlantic Canada to introduce his successor, J. M. Page, to the company’s sales force and some of its customers in that region. They had flown out of Fredericton, New Brunswick, to Montreal and were behind schedule.

When they arrived in Montreal, Mr. Page was put on one flight to Toronto—the one they were both supposed to take—but Leonard was abruptly taken out of the line and escorted to another gate to board a different flight. Leonard protested, but he ended up taking that other flight. He arrived safely in Toronto, but the other aircraft crashed minutes after takeoff, killing all on board. This resulted in Leonard’s working an additional six months until another successor had been put in place.

About this experience Leonard said, “I feel very definitely that this was in God’s plan for my life. It was a shock, and the only thing you can say after having something like that happen is, ‘Lord, you’ve got something for me to do, what is it? Lord, lead me, guide me, keep me.’” This incident would give him a renewed sense of purpose, something he carried into The Gideons, where he was already serving in national and international leadership.2

Having joined The Gideons in 1945, Leonard was elected in 1956 to the Gideon National Cabinet (board of directors) as an area trustee. He soon became involved in the International Extension Committee, the body that supervised all Gideon organizations outside Canada and the USA.

In 1960 he did some work Gideon in Great Britain, combined with company work there, and in January 1961 he organized the Gideon work in India—in Bombay, Calcutta, Madras, and Hyderabad. On that same trip he established The Gideons in Ceylon (Sri Lanka). In 1962 he established the work in Fiji.

Upon his retirement in June 1964, seven months after the fateful plane crash, Leonard was making plans for a round-the-world Gideon trip with his wife, Julia. Beginning September 4, 1964, they spent nine months and visited 26 countries, travelling 55,000 miles.

On that trip they arrived in Burma on the very day all the missionaries there had been ordered to leave. At a meeting that night, amid sad faces and heavy hearts, he told the missionaries assembled his story of the plane crash. At the end one of them said, “Well, if God can look after Leonard Crimp like that, he can look after us.”

He served on the International Extension Committee for 13 years, the last three as its chair (1967–1970) and travelled to many countries, sometimes as a troubleshooter to sort out international issues. He was arguably Canada’s greatest Gideon statesman.

Leonard Crimp was a visible leader, always present. Able to cast vision and to inspire others, he took the long view; he led by example. In sales he was able very quickly to gain the confidence of business owners and top management. This undoubtedly contributed to his success as a sales executive.

Committed and determined, he possessed a positive, “can-do” attitude, realism blended with vision. Though a no-nonsense business leader, he showed genuine concern for the people he led and their families. He himself deeply loved and cared for his own family, cherishing the times they spent together.

When Henry Braun set out to write the 100-year history of The Gideons International In Canada—For Such a Time as This—he chose Leonard Crimp as the quintessential Gideon leader. The book opens with his story about the plane crash.

Leonard provided leadership in the Heinz Company and the wider business world during the difficult and challenging years of the Great Depression and WWII, and also through the great post-war expansion. His business acumen, his decisions, and the training he provided to his sales force across Canada had a significant influence on the company’s growth.

Leonard felt blessed to have worked for a company that espoused his own Christian convictions. Here’s how he described it:

My whole experience with Heinz was a positive one. The founder of the company was a good Christian man, and his principles were all through the company. Principles of dealing with the employees and with the public were strictly above board and very honest…With this background it was a job I felt I could do and maintain my Christian witness.3

In later years Leonard reflected, “As I look back now when the family has expanded from two daughters, to two sons-in-law, seven grandchildren, and 12 great-grandchildren, I have a lot to be thankful for as a very happy father, and a life which has been productive, challenging, and I trust of some use to my fellow man, and to God my maker.”5 An understatement to be sure.

NEIL BRAMBLE is a freelance writer, editor, and speaker living in Surrey, British Columbia. A teacher by profession, for 16 years he taught English, history, and political science. Later he joined the staff of The Gideons International In Canada and, for 17 of his years on staff, he served as editor of The Canadian Gideon. A leader in various contexts all his life, he has read widely in the area of leadership and attended many leadership-training sessions. He knew Leonard Crimp personally.