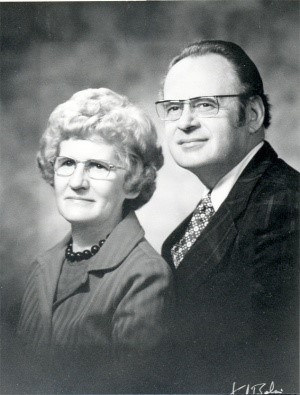 Frank C. Peters, a Mennonite Brethren pastor who became president of Waterloo Lutheran University and used his leadership and relational skills to help that institution move from the private faith-based sector into the public sphere, ultimately re-named Wilfrid Laurier University.

Frank Cornelius Peters: preacher, professor, and university administrator; born 5 July 1920 in Ukraine, the fifth child of Cornelius C. and Katharina (Hildebrand) Peters. A few weeks after his birth, his mother died. His father, a teacher, remarried, and Anna Reimer became the new mother.

In 1924 the family immigrated to Canada, settling in Langham, and then Herbert, Saskatchewan before moving to Agassiz and then Yarrow, British Columbia. At seventeen Frank traveled back to Saskatchewan to find employment. It was while working in Foam Lake that Frank committed his life to Christ, was baptized in the local Mennonite Brethren Church and spent a year at the Bethany Bible School in Hepburn, Saskatchewan. For his second year, he returned to Yarrow, where his father was one of the instructors in the Elim Bible School.

It was here that he fell in love with Melita Krause, a fellow student. Melita was the daughter of Jacob C. Krause (6 March 1894 – 5 July 1970) and Maria (Rempel) Krause (26 February 1895 – 24 January 1992). When World War II broke out, Frank, who registered as a conscientious objector, spent several years in alternate service on Vancouver Island. During this time he was given leave from the camp to marry Melita on 15 August 1943 in Yarrow. Frank and Melita eventually had four sons and one daughter: Robert, Edward, Gerald, Marianne and John.

In 1945, following the war, they moved to Hillsboro, Kansas, where Frank earned a B.A. degree at Tabor College and a M.Sc. degree at Emporia State Teachers College. While in Kansas he pastored several churches. Because of visa problems they returned to Canada, where Frank taught for a year at Elim Bible School. In 1949, Frank became the pastor of the Kitchener Mennonite Brethren Church. While pastoring this congregation, Frank earned a Bachelor of Divinity degree from Waterloo Lutheran Seminary, and a Master of Theology degree from the Federated Faculty in Toronto. He also taught at Waterloo College as a lecturer.

In 1954 Frank was invited to become president of Tabor College, Kansas. However, he resigned in 1956 and earned a Doctor of Theology degree from Central Baptist Seminary, Kansas City and a Ph.D. in Psychology at the University of Kansas. He provided for his family’s livelihood during these years by pastoring local churches.

In 1957 the Peters family moved to Winnipeg, where Frank joined the faculty of the Mennonite Brethren Bible College. He was an outstanding lecturer and students from all across Canada sat in his classes. For eight years he taught in the area of biblical and practical theology. For several years he also served as academic dean of the college. He was a man of boundless energy and combined full-time teaching with preaching ministries in churches all across Canada. Also, he served on the Board of Reference and Council of the Mennonite Brethren Church and for a number of years was moderator of the Canadian Conference (1975-77) as well as the General Conference (1965-69) of the Mennonite Brethren.

Frank was not only a popular speaker but also a good writer, and he contributed regularly to a theological journal called The Voice, published by the Mennonite Brethren Bible College in Winnipeg. He was a man of deep emotions; he could laugh heartily at the droll and absurd, but he also cried quite readily in the face of sorrow and pain. As a trained psychologist, with deep roots in the Christian faith, he was in great demand as a counselor.

He left the college in Winnipeg in 1965 and returned to the pastorate in Kitchener and a part-time teaching position at Waterloo Lutheran University. It wasn’t long before the university invited him to become its president. During the years that he headed the university from 1968 until 1978, Frank’s politically astute leadership helped guide this school from a church-supported university to one receiving full provincial status and financial support (under the name Wilfrid Laurier University). Peters became chairman of the MB Board of Missions as well as a member of the Evangelical Fellowship of Canada. He reached out to other denominations in his spiritual ministry and repeatedly he accepted invitations to serve for short periods abroad.

After retiring from the university and after the children had grown up, Frank and Melita returned to Winnipeg to pastor the Portage Avenue Mennonite Brethren Church. Two years later, in 1982, they returned to Kitchener, from where Frank continued to serve in the teaching/preaching ministry at home and abroad. In the summer of 1987 Frank was elected once more to the Board of Reference and Council of the MB Church of North America. A few months later he flew to Blaine, Washington for a preaching mission. It was to be his last. On his return to Kitchener, he suffered a heart attack, and shortly after he passed away on 7 October 1987 at the age of 67. For an epitaph on his grave stone, Melita chose the verse, “For me to live is Christ, and to die is gain.” (Philippians 1:21)

Peters’ contribution as university president during the Waterloo Lutheran/Wilfrid Laurier transition is described in Ewert’s article above as “politically astute leadership”. That description is amplified by additional information below, by John H. Redekop, Ph.D. D. Hum. (hon.). Redekop, a political scientist, was professor, department head, member of the University Senate and member of the WLU Board of Governors under President Peters.

Frank Cornelius Peters, equipped with two doctorates and pastoral ordination, was internationally acclaimed as a lecturer, orator, and preacher. He was also a highly successful university president. Perhaps his greatest achievement as president of Waterloo Lutheran University was to convince the Ontario government to take over another private university even though the government had publicly announced that such undertakings had ended.

Actually, President Peters had to deal with three opposing constituencies: a substantial cohort of Lutheran faculty members who were determined to keep the university as it was; the Government of Ontario; and his employer, the Eastern Canada Synod of the Evangelical Lutheran Church. With consummate skill he led to the creation of a win-win-win situation. He overcame entrenched but minority faculty opposition by conducting lengthy open faculty meetings where he tactfully gave the opponents all the time they wanted to make their case and then observed his majority supporters defeat them in a democratic vote. He also offered to retain the acronym WLU. He emerged unscathed and with a widely appreciated resolution in hand. He convinced the Government of Ontario by bringing the then-premier (William Davis) and the university affairs minister on campus and pointing out that if WLU would have to close because of its financial crisis, they would have to find spaces for the thousands of WLU students in crowded classrooms. He knew they had no such spaces. With substantial logic he not only convinced them to do what they had insisted they would not do, but he also convinced them to fund a large new campus building, which the government did a few years later, one with more than 100 rooms and offices. Amazingly, the government did this despite a province-wide freeze on all campus construction. Understandably, the new edifice was subsequently named the Frank C. Peters Building.

President Peters overcame the Lutheran Synod’s opposition by convincing the Ontario government to repay the Lutherans for virtually all of the funds they had invested in the construction of various campus buildings since the school was established in 1911. In the end the Synod acquiesced – and gratefully thanked President Peters for the large endowment they now had for their financially struggling Waterloo Lutheran Seminary on campus.

An inspiring leader, a tactful visionary, and a brilliant negotiator had achieved what many respected critics had insisted was impossible. Thus, in 1973, Waterloo Lutheran University became Wilfrid Laurier University.

©1996-2014 by the Global Anabaptist Mennonite Encyclopedia Online. All rights reserved.